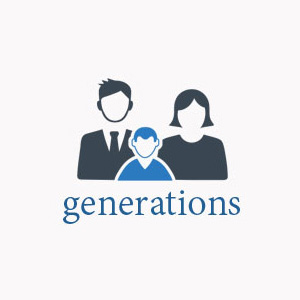 Definitions of generations are not necessarily agreed upon. If you want to use generational research or stats, it’s important that you understand the source definition. I’ve started the embedded chart to show how different studies can have varying definitions, even in studies completed by the same company (case in point GfK). Some sources are pretty similar, especially for the well-established generations, but others can vary by 10 years. If you plan to pull research from multiple places, just be aware that if the definitions vary too much you may run into inconsistencies. Choose your sources and your supporting information thoughtfully.

Census does not typically break anything into generations. When people use Census data for generational research they assign Census age ranges to fit their generational definitions. However, Census does refer to Baby Boomers from time to time as people born between 1946-1964.

This article from the public relations firm in June 2014 defined Millennials as those adults born between 1980-1999.

These are the oddest generational definitions I’ve seen with Gen Z being much older than any other study. The research refers to age breaks rather than years born. Gen Z (ages 18-24), Gen Y (25-34), Gen X (35-44), Boomers (45-64). It seems the data was analyzed using pre-existing age groups which they fit into generational buckets. It remains unclear however, why Gen Z is so much different than other sources (even their own studies)

Another study by GfK set by age ranges rather than years born. Gen Y (18-34), Gen X (35-48), Baby Boomers (49-65). However this time the age breaks do not fit a typical five-year span. Both Gen Y and Boomers are six-year breaks while Gen X is a 13-year span. Their research was was 18-65 year-olds and then broken into those buckets. The logic behind this breaks is unclear.

One more from GFK reflecting, again, different generational breaks, again set based on ages at the time versus year born. Gen Y (ages 13-33), Gen X (34-47), Baby Boomers (48-54). Specially, interesting in this study is that Baby Boomers are shaved down into a much smaller group than is typically seen. Only William Schroer, of the sources listed here, breaks Baby Boomers into two groups.

In this article from 2012 by George Masnick we are provided a different method of looking at generations. While Howe & Strauss looked at shared coming-of-age experiences, Masnick shows us another way to look generations — just by sheer birth rates. A bit like a scree plot.

Research done by IPSOS in June 2014 provides a definition for Millennials. Other generational breaks are unknown at this time.

The Millennial Generation Research Review of research from 2009-2012 compiled by the U.S. Chamber of Commerce provides a handy definition chart in the introductory section of this 40-page PDF.

The header links their Wikipedia page. The have written several books on generational differences as well as one specifically on Millennials, the term of which they coined.

Shroer is marketing and research services firm. Ten years ago he put together his own cheatsheet describing and defining the generations which I think is a good synopsis and provides some key stats you may find useful – birth years, coming of age years, population, and a narrative. Also of interest is that he breaks out Baby Boomers into younger and older sub-segments, something that is not commonly seen, although GfK seems to have used that strategy in their streaming video study from 2013.

© 2020 SOLUTIONS THROUGH RESEARCH. ALL RIGHTS RESERVED. WEB DESIGN BY HIREAWIZ